Handing on the Baton 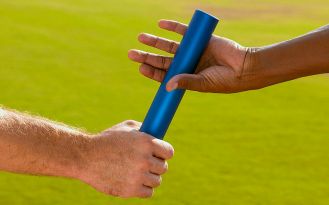 None of us is immortal. Leaving aside the question of what happens when we die; the fact is that we will all leave this life someday. We have opportunities to build something in our lifetime. It may be a family, a business, a church, a ministry or a charity. When we arrive towards the end of our current existence we may well feel that there is unfinished business but sooner or later we have the opportunity to pass responsibility onto the next generation.

Passing things on to another generation is a natural process. It happens in families all the time. As parents, and grandparents, we try to build into our children some of our life values and try to teach them not to make the same mistakes as we have made. Whether we like it or not, our children will normally outlive us and eventually we will not be around to guide them and support them any more.

Mentoring is not controlling

From a BBC report

In sport, the process of handing over to a future generation happens much quicker. In his recent triumph at Wimbledon, Andy Murray was watched by his mentor and coach, Ivan Lendl. At 53 years of age, Ivan was far from being old but had retired from professional tennis many years before. But he was still able give Andy a great deal of help and wisdom, and he could teach Andy techniques and emotional control. But come the match, he had to sit in the stands and watch Andy play and then win, but could do nothing further to change the result.

Coaching and mentoring are not control. As we pass things on to a future generation we must learn to hand over control. We can help, support, guide and mentor, but we have to leave the “doing” to other people.

Passing the baton on as in a relay race is a good metaphor but like most metaphors is not perfect. In a relay race the runner will reach out the baton to the next runner and as soon as the second runner has grasped the baton, the first runner lets it go. Passing the baton on will only take one of two seconds! In reality things are not that simple. I remember this metaphor being used to describe the process of handing things over to my successor. I remember saying, “Simon, I will pass the baton on but first we will run another lap together, both of us holding the baton until I finally let go. The process of handing over lasted several years, but is now complete. The baton has been passed on.

Nine years ago I had quite a serious stroke. Body movements and speech were restricted but fortunately my mind was not affected. (So people say, anyhow!) If the stroke had been much more serious, and I had been unable to return to work there is every chance that the charity would have collapsed. Far too much was dependent on me.

The stroke was a wake-up call. I realised that I had to find the next generation to pick up the reins or else the charity would die with me, and that was the last thing I wanted.

A year or two afterwards on the first Sunday of the New Year, a young man came up to me and said, “George, I’m going to work for Kingscare”. Without stopping to think about it I instantly knew that what he said was true and I replied, “Simon, I don’t know how this will come about but I agree with you”.

For five years or so, we had been going through a process. I had to find all the things which were dependent on me and make changes. The software package I had written was now working on obsolete code and we had to find a package, which could be supported which would control donations, GiftAid and charity accounting. We needed to outsource the responsibility for our computers. We need to unlock the knowledge in my head. This seems quite a short list but I can assure you it was far from being uncomplicated and took time and determination.

Now is the time

Last year, I went to Sri Lanka for six weeks to seek wisdom for my own and the charities future. It became clear to me that now was the time to hand over responsibility to Simon. The trustees of the charity then agreed that Simon should be the new director. I now work part-time as part of the team to advise, no longer draw a salary, and serve as a trustee. I have every confidence in Simon, and Jessica his wife.They are a bright young couple and the future of the charity (now called Karuna Action) will flourish under their control.

Has it been easy?

No, it certainly hasn’t been easy!  I have had to make adjustments which I didn’t, and probably couldn’t, foresee. At times it has been painful, for me, and probably for the others too. It has required commitment, determination and a willingness to change. But it has been very worthwhile. The end result has been that the long-term security of the charity has been assured.

The older to serve the younger