If I told you that I have 34 slaves working for me, you would be rightly shocked. “What a hypocrite”, you might well say, “Fancy writing all those blogs about justice and compassion and yet using slave labour to support his life-style!”.

I have just typed in some personal deals into a survey by slaveryfootprint.org. The computer makes some assumptions on the products I buy and came up with an astonishing figure of 34 slaves being involved in the manufacture. Christine and I are a semi-retired couple, living in an average house, sharing a car, living on an around average UK Income. With different parameters you may find that you ’employ’ 100+ slaves.

I was introduced to slavery footprint when I went to the Justice Conference in Los Angeles in February. Here is a video of Justin Dillon’s talk at the conference:

What is a Slave

A slave is anyone who is forced to work without pay, being economically exploited, and who is unable to walk away. The practise is also called ‘bonded labour”, ‘forced labour’ or ‘involuntary servitude’. (See justice-for-bonded-labourers blog post).

How many slaves are there in the world today? Slavery is illegal in every country and so estimates vary. Reputable sources put the figure to at least 27 million. There are millions also, though having some freedom, are exploited and trapped into virtual slavery.

Slavery exists when unscrupulous employers exploit workers, made more vulnerable by high rates of unemployment, poverty, crime, discrimination, corruption, political conflict or cultural acceptance. Immigrants are particularly vulnerable, but people also may be forced into labour in their own countries. Female victims of forced or bonded labour, especially women and girls in domestic servitude, are often sexually exploited as well.

Historically slavery was quite different. In Roman times, you would have been a free-man, a slave-owner or a slave. There was very little in the way of manufactured goods, and most would be made by skilled artisans and probably not by slaves. Many people grew their own food, but a lot of agricultural produce would have been produced by slaves.

In today’s consumer society we rely heavily on manufactured goods. The supply chain for the raw materials is very complicated, and somewhere down the line slavery is likely to be involved. So we may not think of ourselves as slave-owners but indirectly we do rely on slaves in the supply of raw materials or manufacture of the products we buy.

For example, we buy a mobile phone. The phone is probably assembled in countries like China or Korea, and put together by low-paid workers who would not be regarded as slaves. But many different raw materials are used. Coltan, probably mined by slaves in the Democratic Republic of Congo, is used to manufacture tantalum capacitors which are needed in all electronic products, including our mobile phones.

In a competitive market, companies will buy raw materials from the cheapest source. This is likely to come from countries where slave labour is used to minimise labour costs. The trouble is, that as consumer, it is impossible to avoid purchasing products which rely on slave labour in the manufacturing process or in the supply chain. In fairness, it is almost impossible for a manufacturing company to avoid involving slave labour in the supply of their raw materials.

What can I do?

I was talking to Christine, my wife, about the number of slaves which we indirectly ‘own’. She replied, “So, what can we do about it?”. That is the $64,000 question and one that has puzzled me greatly. Other than choosing to live more simply, there isn’t much we can do on our own, as individuals. But collectively there may be an answer.

If it were possible to quantify the problem then we could choose the products we buy. But no complete list exists. If, for instance, I could be sure that buying a television from Sony, rather than say Samsung, would avoid the use of slavery, it would be a ‘no-brainer’ to choose the right product.

We could try to avoid produce produced in a different country, I like fish, and sometimes buy packets of river fish, shipped from Vietnam. Are the fishermen paid a living wage? What about the packers? the shippers? the manufacture of the packaging? We cannot tell. Perhaps I should avoid the problem by buying fish from local fishermen. But perhaps, I would then be depriving workers in Vietnam of their source of income.

There have been great steps forward produced by the power of the consumer. For example:

These are examples where companies have been encouraged to make sure that their supply chain is free from certain things, like fertilisers or illegal logging. We cannot underestimate the power of consumer demand and this, I believe, provides us with the most hope in reducing our reliance on slave labour. 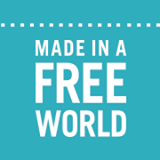 Made in a Free World

Made In A Free World is an organisation which seeks to motivate people towards a world free from slavery.

Made In A Free World believes that changing the world takes everyone. We are a network of individuals, groups, and businesses working together to disrupt slavery and make freedom go viral. We produce innovative campaigns, on the ground projects, consumer engagement tools, and business solutions designed to get slavery out of our system. Our dream is simple.

“One day everyone and everything will be Made In A Free World.”

We must be prepared to pay more for our consumer products. This will ensure that no workers are enslaved or exploited to manufacture or grow the things we buy.

Millions from India’s lower castes are enslaved in brick kilns, rice mills, and embroidery factories. Hundreds of thousands more are trafficked to the Middle East, United States and Europe to work as domestic servants and low-skilled labourers.

Landowners enslave 1.8 million Pakistanis as bonded labourers in the agricultural and brick industries. Those seeking legal help are often kidnapped along with their families.

While slaves in the Thai garment, sex, and domestic sectors certainly don’t have it easy, the Thai fishing industry is particularly brutal. Physical violence and murder at sea is well documented.

Raw materials from slavery include: Fish, Latex, and Rubber.

Indonesian brokers traffic 50% of all Indonesians working abroad – around 4.5 million people – equal to the entire population of Washington D.C.

Malaysia enslaves close to four million documented and undocumented foreigners. Recruited to work in hotels and restaurants, once they arrive most are forced into Malaysia’s thriving sex trade or onto plantations and construction sites.

Taiwanese labour brokers charge migrants up to $8,000 in recruitment fees, enslaving them in Taiwan’s manufacturing, domestic and fishing industries until they come up with the money.

Raw materials from slavery include: Nylon and Polyester.

Slavery isn’t confined to mining, agricultural and sex industries in the DRC. The Congolese Army enslaves hundreds to carry munitions, supplies, looted goods, water and firewood. Many die of exhaustion or are just killed.

Africa (the rest of)

Enslaved, beaten, and forced to work in sub-human conditions, children satisfy the demand for cheap labor in Africa’s agricultural, mining and fishing industries.

Across Russia you’ll find over one million slaves. On the streets of Moscow you’ll find an estimated 20,000-30,000 children involved in prostitution.

Leveraging family and business connections overseas, Australian crime syndicates traffic in labor from throughout Asia and the Pacific. Victims are enslaved by a combination of document confiscation, threats of physical harm, and debt bondage.

The United Kingdom and the European Union

14,500 to 17,500 victims are trafficked in the U.S. each year. Most are women and children forced into the sex industry.

Tagged as: bonded labour, consumer power, Justin Dillon, made in a free world