The King who washes feet 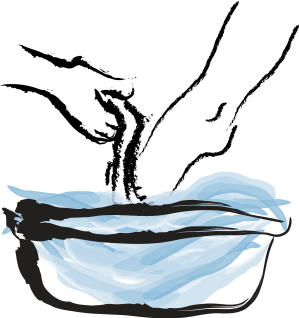 Peter looked on with horror as the person who he had recognised as the Son of the Living God, got up from a meal they were sharing, took off his clothes and wrapped a towel around himself. He poured water into a basin and did the job of the lowliest of servants as he started  to wash the feet of his disciples and dry them with his towel.

Peter was in a turmoil. How could his Lord, Master and Teacher stoop so low and be a servant? How can I let him wash my feet? I should have washed his feet when we first arrived but I thought one of the others would do it.

He said, “Lord, are you going to wash my feet?” but Jesus replied, “You do not realise now what I am doing, but later you will understand.” Only when Jesus said, “Unless I wash you, you have no part with me” did Peter agree.

When he had finished washing their feet, he put on his clothes and returned to his place. “Do you understand what I have done for you?” he asked them.

Now that I, your Lord and Teacher, have washed your feet, you also should wash one another’s feet.

I have set you an example that you should do as I have done for you.

Very truly I tell you, no servant is greater than his master, nor is a messenger greater than the one who sent him.

The fact is, that Jesus had been patiently showing them and teaching them that his kingdom was different but it was’t till later that they fully ‘caught on’.

A new form of kingdom

When Jesus came to this earth, it was not to start a new religion but to start a new kingdom – the kingdom of heaven, or the kingdom of God. But this kingdom was not an alternative political system, it was a completely new form of kingdom – one where the King is ready to wash the feet of his followers, a kingdom whose subjects are volunteers, where love rules: not domination.

When Jesus started talking about the kingdom of God, the people envisioned an alternative empire, where the power of their God would rule them and defeat their enemies. How wrong they were. Jesus made it plain that God’s kingdom was not based on domination, but upon truth, freedom and compassion.

We are used to countries, corporations and religions with pyramid, hierarchical structures where politicians, directors and bishops are at the top. They rule over civil servants, managers and clergymen, who in turn rule over ordinary people.

Jesus called them together and said, “You know that the rulers of the Gentiles lord it over them, and their high officials exercise authority over them. Not so with you. Instead, whoever wants to become great among you must be your servant, and whoever wants to be first must be your slave— just as the Son of Man did not come to be served, but to serve, and to give his life as a ransom for many.” (Matthew 20:25-28 NIV)

The kingdom that Jesus introduced had a totally different structure. Although Jesus is Lord, or King, he does not dominate his followers and he encourages his followers to serve, even be a slave in his grand alternative.

Jesus told a parable, which I must admit I have struggled with a bit in the past. It is about a land-owner who hires some workers for the whole day at an agreed rate. Then he hires some more workers for part of the day, then some more for the last hour only. At the end of the day he pays each worker the same amount regardless of how long they had worked.

Those who had worked all day felt disgruntled. They had ‘borne the burden of the work and the heat of the day’. But Jesus had a principle to demonstrate. His kingdom is far bigger than ‘workers rights’  or ‘human rights’.

When someone invites you to a wedding feast, do not take the place of honor, for a person more distinguished than you may have been invited.

If so, the host who invited both of you will come and say to you, ‘Give this person your seat.’ Then, humiliated, you will have to take the least important place.

But when you are invited, take the lowest place, so that when your host comes, he will say to you, ‘Friend, move up to a better place.’

Then you will be honored in the presence of all the other guests.

Does God dominate his creation?

God created us in his own image. He gave us free wills – the ability to make up our own minds. It would have been so easy for God to have made us so that we had no choice but to follow his way, but we would have been mere robots. I don’t believe that God has ever chosen to dominate mankind. He seeks volunteers in his kingdom, not people following him out of duty or fear.

I wish the same could be said of religion. The medieval church used the fear of everlasting torment in hell to maintain the status quo and dominate the largely illiterate majority. Our religious systems mirror the hierarchical structure of our nation states and our big corporations. By and large we have not learnt that to follow Jesus means the treat the least as first, to serve and not be served, and that there is no place to big egos.

I used to look forward to a time when the church would expand and take over the whole earth. But God won’t take away our free wills and the thought now of a super-church dominated by super-pope figure dominating the rest of mankind, fills me with horror!

The New Testament is full of promises that Jesus will return. This is not the time or the place to say what this means, and how and when it happened or will happen. Some theologians see a second coming of Jesus to be a time for Jesus to rule on earth.

But the nature and character of Jesus hasn’t changed! He isn’t going to change from being a servant-king to a king who rules by force and dominate people against their wills. He wants everyone to voluntarily decide to follow him, to love him and also every man, women and child.

All of this is beautifully summed up by Paul in the letter to the followers of Jesus in the city of Philippi:

Therefore if you have any encouragement from being united with Christ, if any comfort from his love, if any common sharing in the Spirit, if any tenderness and compassion, then make my joy complete by being like-minded, having the same love, being one in spirit and of one mind.

Do nothing out of selfish ambition or vain conceit. Rather, in humility value others above yourselves, not looking to your own interests but each of you to the interests of the others.

In your relationships with one another, have the same mindset as Christ Jesus:

Who, being in very nature God, did not consider equality with God something to be used to his own advantage;

Rather, he made himself nothing by taking the very nature of a servant, being made in human likeness.

And being found in appearance as a man, he humbled himself by becoming obedient to death— even death on a cross!

Therefore God exalted him to the highest place and gave him the name that is above every name,

that at the name of Jesus every knee should bow, in heaven and on earth and under the earth,

And every tongue acknowledge that Jesus Christ is Lord, to the glory of God the Father. (Philippians 2:1-11 NIV)