Rescued from slavery on rose farm

Imagine fields of roses and a farm dedicated to the supply of these beautiful flowers to wealthy people in Bangalore, India. Roses represent romance and beauty.

But there is a darker side to this idyllic picture. The farm relied on 4 young boys, held as slaves to supply the labour. Two brothers had been trapped there for 5 years. One boy was just 9 years old.

They had been working on the farm to pay back a loan their parents had taken from the owner. But it was obvious that the loan would never be repaid and the children were effectively slaves.

Work began at 5 am. While other children went to school, these boys started watering 4,000 rose plants on the farm. The working day was twelve hours – though during busy seasons they worked until well past midnight.

The boys were beaten if they made any mistakes – like over-watering a bush or breaking a plant. The owner used sticks and his own fists to reinforce the rules. One of the boys ran away, but was tracked down, brought back and beaten. Another boy hurt his leg while working. When he asked the farm owner for money to visit the hospital, he told the little boy to rub manure on the wound to heal it!

This story comes from the website of International Justice Mission, a human rights organisation that secures justice for victims of slavery, sexual exploitation and other forms of violent oppression. IJM lawyers, investigators and aftercare professionals work with local officials to ensure immediate victim rescue and aftercare, to prosecute perpetrators and to promote functioning public justice systems. 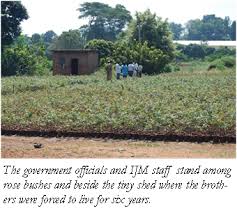 found out about the rose farm. They took the evidence to the authorities and the next day they organised a rescue. These authorities had been trained by IJM on the laws against forced labour slavery.

It was late morning and the boys were hard at work when the rescue team arrived. Within fifteen minutes, the boys had answered questions, packed up their few belongings and were on their way to the government office. An IJM staff member and a police official rode with the boys to the police station. During the ride, the boys were a little confused but obviously relieved. They kept saying how they didn’t want to go back to the farm.

The boys answered more in-depth questions at the government office. The boys were barred from going to school and were working 12-plus shifts a day. The owner had promised to give the boys mobile phones, clothes, and money, but those promises were never fulfilled. They were slaves.

It was clear the boys had been held as slaves. Government officials prepared release certificates . These emancipate them from slavery and protect them from the farm owner.

The children were so happy to see their parents again. The head official encouraged the boys to go to school and made arrangements for them to do so. IJM will be working with the boys as they adjust to this new life with new rhythms, new hopes and opportunities. They will join IJM’s two-year programme for rescued slaves. IJM’s team of social workers will create individualised care plans to help the boys adjust to school and find tutors to help them catch up.

We would not normally associate roses with slavery. These 4 boys were rescued but there are millions more, women, men, girls and boys trapped in some form of slavery. It is not legal anywhere, but often laws need strengthening, officials need training and  public attitudes need to be changed.

IJM and many other organisations are doing their best to end slavery. They need support and funding. We all need to be aware of slavery in our own country. Because it is illegal it is well-hidden. Sometimes it is accepted as ‘normal’ by the general population, but this needs to change. Our politicians need to be aware of how we feel about blatant abuse of the laws and the exploitation of people trapped in slavery.