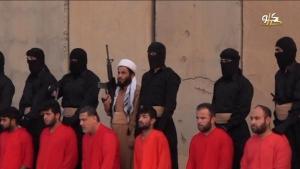 Is war ever justifiable?  I contend that there is no such thing as a ‘just war’.  We must ask the question: “What does Jesus say about fighting for King, country, empire, freedom or democracy?” Can violence overcome evil, even if it is the lesser of the two evils, and is it morally acceptable?

We live in a society in which the law intervenes if we injure, hurt emotionally or physically, or kill another human being.  Yet in war, our soldiers are encouraged to kill soldiers and civilians, all in the name of patriotism!  What sort of logic says that if I go to another country and kill people I would be jailed or executed, but if our politicians declare war I can put on a uniform and be encouraged to kill.

The ‘just war’ theory was invented when the emperor Constantine made Christianity the official religion of the Roman Empire.  It has been used throughout history by the ‘Church’ to legitimise killing, suffering and devastation.  During the middle ages the priesthood would tell their Kings that their evil plans were justified because the other side were even more evil.

Virtually every war has been declared a just war by countries on both sides of the conflicts.  The crusades, blessed by the popes, were declared just because they defended christianity from the expansion of the Islam religion.  Moslem rulers considered they were doing the will of Allah by fighting the christian ‘infidels’ and seeking to expand Moslem influence.

In more modern days wars to protect empire and glory were declared just and even good.  Word War I was fought to protect the British Empire against European competition and millions died defending our ‘right’ to exploit the rest of the world.  The wars in Iraq and Afghanistan were declared just because they were against an evil dictator and a country which harboured terrorists.

When we declare war against evil and try to fight evil with violence, the result is even more evil.

Jesus did not preach much about non-violence. He lived it.

You have heard that it was said, ‘You shall love your neighbour and hate your enemy.’
But I say to you, love your enemies and pray for those who persecute you,
so that you may be sons of your Father who is in heaven; for He causes His sun to rise on the evil and the good, and sends rain on the righteous and the unrighteous. (Mathew 5:43-45 NIV)

This must surely be one of the most radical statements made by Jesus.  To love our enemies means to treat them as human beings and consider them as important as ourselves and our friends.  I can love my friends but to love someone who is trying to hurt me demands following Jesus completely.  I look into myself and realise that I am incapable of loving my enemies without help from God himself.

What does it mean to love our enemies:

I mentioned before that the death and resurrection of Jesus was the ultimate triumph of non-violence over violence.  This statement is particularly valid when we consider how he was able to unconditionally forgive the men who plotted against him and those who nailed him to the cross.

Jesus said, “Father, forgive them, for they do not know what they are doing.”
And they divided up his clothes by casting lots. (Luke 23:34 NIV)

Non-violence is not a passive thing.  It is not just not committing violence.  It means understanding our enemies, seeking their good, blessing them and lastly forgiving them.

What does it mean for our country, and for us personally

While the rulers of my country and the majority of its inhabitants believe that violence can overcome evil, then the principal of non-violence and loving our enemies cannot easily be applied.  But the church is called to be salt and light to this world and we must begin to take the teachings of Jesus seriously.  Too many people who call themselves Christians still live in the Old Testament and want God to smite their enemies.  We must radically review our outlook and ask God to help us.

I maybe considered naive or idealistic but I believe that if the Christian Church declared that all violence was evil then our politicians could not claim that their plans to remove evils from this world through violence was just and good.  But non-violence is a personal thing, not just for governments.  We cannot be compelled to love and forgive, neither by our fellow-man or indeed by God.

We can never overcome evil with violence.  How do I know that overcoming evil by violence will never work?  Simply because God had a different plan!  His plan for the world was submitting himself to the violence of his enemies and triumphing over them by the death and then the resurrection of Jesus Christ. We too can choose non-violence and truly love and forgive those who make themselves our enemies.