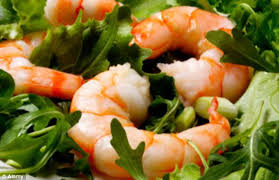 It is so easy to pop into a supermarket and buy a packet of prawns, eat a pre-cooked seafood pie, or enjoy a pawn cocktail at a favourite restaurant. Have we ever stopped to wonder, how once a luxury item, is now common-place? Have we ever wondered why the price is so low?

The hard facts are that there can be abuse of workers, injustice and slavery at every stage in the process: from the women and children who catch the baby prawns (fry), the prawn farmers, the depots, the packers, and transport to your supermarket. The cheapest prawns come from Thailand, Bangladesh and other Asian countries. This is no accident, as wages are least in these countries, and exploitation and slavery is rampant, though largely hidden.

The details that follow are horrific but do not underestimate the consumer power.

What can we do?

If we live in Europe, Australia or the USA, we cannot directly stop the illegal practises in other countries, but we can apply pressure as importers and consumers which can force overseas governments and corporations to take action to stop the abuse.

As consumers we do not want to buy prawns involving slavery or exploitation. Consumer power is vital and effective. If nobody purchases products then supermarkets and importers are forced to buy from other sources, or they must put pressure on producers to ‘clean up their act’.

The Guardian (UK) Newspaper has published an article (Click here) on the widespread use of slave labour in Thailand in the prawn industry. It includes the video reproduced below.

The Guardian report explains that slaves, forced to work for no pay for years at a time under threat of extreme violence, are being used in Asia in the production of seafood sold by major US, British and other European retailers.

A six-month investigation has established that large numbers of men, bought and sold like animals and held against their will on fishing boats off Thailand, are integral to the production of prawns (commonly called shrimp in the US) sold in leading supermarkets around the world, including the top four global retailers: Walmart, Carrefour, Costco and Tesco.

“I thought I was going to die,” said Vuthy, a former monk from Cambodia who was sold from captain to captain. “They kept me chained up, they didn’t care about me or give me any food … They sold us like animals, but we are not animals – we are human beings.”

Another trafficking victim said he had seen as many as 20 fellow slaves killed in front of him, one of whom was tied, limb by limb, to the bows of four boats and pulled apart at sea.

“We’d get beaten even if we worked hard,” said another. “All the Burmese, on all the other boats, were trafficked. There were so many of us [slaves] – it would be impossible to count them all.”

Migrant workers are being enslaved in grim and violent conditions to produce many of the prawns on our supermarket shelves. But just as people across Britain rallied to ban the slave trade 200 years ago, we can get our biggest retailer to crack down on these abuses.

Recent investigations by the Environmental Justice Foundation and The Guardian have shown serious human rights abuses including trafficking, slavery and murder in the Thai seafood industry. One migrant fisher saw a fellow crew member being murdered, reporting: “The other captains came and pinned him down. They tied his hands and legs to four boats, and they pulled him apart.”

Thailand is a major supplier of prawns to the UK, and Tesco is one of the biggest companies that buys from a massive Thai company linked to this slavery. Tesco’s Annual General Meeting is tomorrow, and if enough of us call on them now, they can lead the way to stop the seafood slavery. They say they use their scale for good and that meeting customer needs is a priority. So let’s ask them to stop buying Thai prawns until they’ve finished rigorous, independent audits of their full supply chain.

We have to move fast, while this news story is fresh. Click below to sign now, then share this with everyone, so we can make it massive before we deliver it to Tesco’s CEO Philip Clarke in front of their shareholders and the watching media at their big meeting.

You can view and sign this petition by clicking here.

A report and film has just been released by the Environmental Justice Foundation called “Impossibly Cheap: Abuse and Injustice in Bangladesh’s Shrimp Industry“. The report reveals evidence of human rights and labour abuses which take place at every stage of the lucrative Bangladeshi shrimp (prawn) industry.

Shrimp is one of the most valuable seafood products in the world.  Bangladesh is among the top ten exporters and shrimp its second largest foreign currency earner, after the garment industry. Despite the high value of the product, the supply chain is plagued by economic, labour and social issues and workers face exploitative working conditions

The report features testimonies recorded during investigations in 2012, and gives examples of:

The report examines how global demand for a plentiful supply of cheap shrimp has caused rapid expansion of the industry and significant regulatory gaps. The majority of the sector is unregistered and informal and this, coupled with a lack of transparency in the supply chain, allows human rights and labour violations to occur unchecked.

There is a hidden human cost when shrimp are imported from Bangladesh for consumption in Europe and the USA. Legal requirements for imports are concerned with food safety, hygiene and consumer health protection. Little consideration is given to labour and human rights abuses in the supply chain of the producer country.

EJF is calling for the strategic and long-term commitment of all shrimp industry stakeholders to bring an end to human rights and labour abuses and foster the development of socially equitable and environmentally responsible shrimp farming.

Testimonies from the victims EJF interviewed:

“When I found it difficult to pay back, our net was taken away – he’s threatened us.” “Look at us, we are the loser in every way…How will we survive?”

“The way they treat me is really unspeakable. They don’t treat us as human beings, and the language they use – it’s really derogatory. It’s not dignified at all. For example, when we go to ask for our wages they say, ‘Go to the street and beg instead, why are you here?’ That really upsets me a lot.”

“It’s outrageous than an industry generating such high levels of export revenue is failing to uphold the basic human rights of the workers that produce its products. Consumers in Europe and the US should be aware of the hidden cost to the impossibly cheap shrimp we consume that involves the brutal treatment of workers. In the 21st century, food produced by forced or bonded labour should not be on our plates.

The problems are systemic, but the importance of export markets to Bangladesh’s shrimp industry offers an opportunity for retailers and consumers to use their power to stand up for the basic rights of those who provide our shrimp. Changes to the structure, management and regulations of the industry could protect those who are vulnerable and suffering from abuses and allow the people of Bangladesh to benefit from their natural resources.”