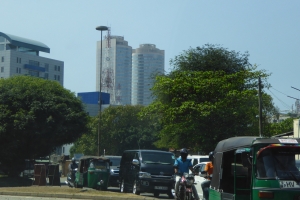 The modern city of Colombo

I first visited Sri Lanka early in 1988, but have just returned from what must be about my 30th visit. The roots of the poverty relief charity, Kingscare/Karuna Action developed here, and the country has been central to it’s work and vision.

I remember well my first visit. I came with a burden and a dream along with a certain amount of idealism. I knew that God had called me to take some action to relieve poverty which I knew held so many in it’s grip of slavery. I had read every book I could find, both Christian and secular, on the subject of poverty and world problems. I was anxious to find ways that the Church of Jesus Christ could be a blessing to the whole world.

I landed at the old airport which was hot and stuffy. What a difference decent working conditions make! Before long a new air-conditioned airport terminal was built and the attitude of the staff changed from being surly to friendly and helpful.

When I first visited Colombo, the capital, it would have been difficult to find a building more than two stories high, but now the city is full of high-rise offices, banks and hotels making it almost indistinguishable from other cities in the world. In spite of the high rate of input duty (up to 120%) on vehicles, the roads are teaming with modern cars and people carriers. 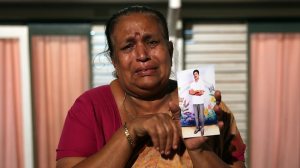 A grieving mother mourns her son.

The country has been plagued by civil war for many years between Tamil separatists and the Sinhala majority. The Jaffna region in the North has been under control of the Sri Lankan army, the “Tamil Tigers”, the Indian Peace-keeping Force and again by the Sri Lankan army. Fighting has been desperate and devastating to the inhabitants but eventually, not without some controversy, the Sri Lanka army defeated the LTTE (tigers). The challenge now is to win the peace after winning the war.

A few years ago, I travelled by road back from Jaffna to Kandy. Jaffna was controlled by the army, but vast swathes of Northern Sri Lanka was controlled by the Tamil Tigers. We left the army checkpoint and within a mile, came across the Tiger checkpoint. A big, burly soldier, gun in hand, came up to my side of the car, and declared, “Good morning, I am Tiger”. I said, “Hi, I am George”, and shook his hand.

Another time, when Jaffna was under the control of the Indian Army, I was ushered in to see the Indian commander of the district. He said, “I suppose you think we are all savages”. I assured him that I didn’t think anything of the sort. I think he just wanted to see a white man who was brave(?) enough to enter his territory!

The ordinary people suffered greatly during the war. When the Sri Lankan army threatened to take over the city of Jaffna, the whole population was herded by the Tigers into a jungle area.  Countless lives have been lost, but sometimes it is the loss of ‘little’ things which causes distress as well. Shanthi was devastated when she lost all her wedding, and other, photographs when her house was bombed. Pastor Josiah was mortified by the loss of his meticulously written accounts.

The eventual defeat of the LTTE was decisive and complete. Many civilians, caught up in the fighting, were killed. There has been a lot of controversy about human rights in the last few weeks of the war. I will make no comment other than to say that atrocities have been committed by both sides in a long and bitter war.

Now, at last, there is peace. With peace has come prosperity:

One very visible sign of prosperity is the mobile phone. Telephone land-lines were hard to get, but mobile phones have revolutionised communication between people. Even relatively poor people can now own and enjoy mobile phones, relatively cheaply. I purchased a local sim card for my phone and was able to down-load 3.5 gigabytes of data for about £12 as well as having an allowance for local calls and IDD calls.

The recent presidential elections produced a new president. Everyone I met seemed pleased with the result and the general feeling was that the country faced a new start with new opportunities.

I sense a muted optimism about the future. I share that optimism and believe that Sri Lanka has a great economic future with prosperity for most of it’s people.

So, with this increased prosperity, is there still a need for Karuna Action to be involved. There is still poverty, well hidden from tourist eyes, and so, “Yes”, there is still much to be done to enable the poorest to enjoy the same freedom from poverty experienced by others.