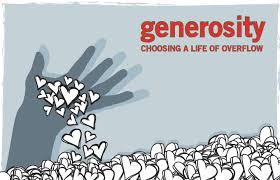 Yesterday we were having a get-together of a support group for a small charity.  We were discussing the challenges of supporting our partners work in combating poverty and creating opportunity for people around the world.  There is no avoiding the fact that we need money to meet the needs.  We discussed “Do we fundraise or do we activate the generosity which we know is out there?“

Traditional fundraising involves talking about needs and aims to get people to give out of sympathy, duty or guilt.  Pictures of starving babies produces a powerful emotional response but potential supporters may well feel that they are being manipulated and in the end compassion fatigue can set in.  As a small charity we are up against professional fundraising from larger charities who are more able to exploit the media of television, video and social networking.

People are tired of being bombarded with needs and feel unable to judge between them.

What if we concentrated on the goodness of givers rather than the needs of beneficiaries?  I believe that there is a natural generosity built into every person which just needs activating.  That generosity can be obstructed by events in life, for example:

But in spite of the problems, there is a generosity in people that cannot be overstated. People want to give: they just want to know how, and be presented with the opportunity.

The apostle Paul was collecting money for the needs of the people back in Judea.  He said very little about the needs, in fact we do not know how the money was actually spent.  He said a great deal about the joy of generous giving.

Remember this: Whoever sows sparingly will also reap sparingly, and whoever sows generously will also reap generously.
Each of you should give what you have decided in your heart to give, not reluctantly or under compulsion, for God loves a cheerful giver.
And God is able to bless you abundantly, so that in all things at all times, having all that you need, you will abound in every good work.
As it is written:
“They have freely scattered their gifts to the poor;
their righteousness endures forever.”
Now he who supplies seed to the sower and bread for food will also supply and increase your store of seed and will enlarge the harvest of your righteousness.
You will be enriched in every way so that you can be generous on every occasion, and through us your generosity will result in thanksgiving to God. (2 Corinthians 9:6-11 NIV)

The fact is that generosity is a two-way street.  We cannot be generous without being blessed ourselves.  It is a win-win situation.

Eugene Cho wrote in his book ‘Overrated, Are we more in love with the idea of changing the world than actually changing to world‘:

“Generosity is what keeps the things I own from owning me. In other words, the point of my generosity isn’t just to bless others; it’s also to liberate me.”

So being generous sets us free from possessions which can so easily end up owning us.

So how can I, as a charity trustee and blog author, seek to activate that latent generosity in potential supporters.