A School in Kampala 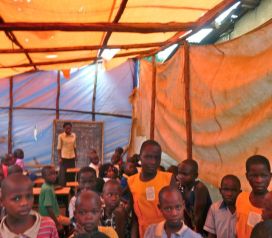 A Classroom in Kampala with temporary walls and ceilings

It was a hot, humid day. We were standing in the headmistress’ office in a primary school in Uganda. She was explaining how many of the poor families who sent their children to the school would not be able to afford to send their children to secondary school. I looked into the eyes of many of these children and saw that they were intelligent and willing to learn. The tragedy struck me then. These boys and girls could not progress further with their education which will mean that they would not get decent jobs and so one poor generation would produce another poor generation!

Last year I travelled to Uganda with Simon and Jessica Hannington to visit our partners in Kampala and Jinja. First we visited Kampala, the capital of Uganda. Kampala is a spreading city with a population of 1.4 million people. Some of Kampala is modern with fine hotels and restaurants but on leaving the city centre we started to see the slums. We were heading for Wabigola which is a particularly needy area not too far from the middle of town. We were going to meet Pastor Joel and his team.

I first met Pastor Joel several years ago and was impressed by how he and his church had taken in many of the orphans and street children into their homes in a sort of unofficial fostering system. In earlier times, before the onset of AIDS, there would not have been many uncared for orphans because the extended family system would generally mean that a parent-less child would be looked after by aunties, uncles or grandparents. But now communities cannot cope with the large number of orphans released on the street because of the AIDS epidemic.

Pastor Joel, and his church members, decided to offer homes to many of these children out of their own limited resources. To make sure that these children would be able to receive a good education and help their “foster” parents we, (Kingscare, now called Karuna Action,) decided to help these children using our child sponsorship scheme. We are currently supporting 44 such children, in primary schools, secondary schools and at university.

But Pastor Joel explained that the children being helped were the “tip of the iceberg” and that there were many more children who needed help to be able to go to school, particularly secondary school. Primary education is, in theory, free in Uganda. But state-run schools have huge classes, and their teachers struggle to cope with so many children. To meet these needs, many “private schools” have sprung up. These obviously have to charge fees to pay teachers salaries and they get no help from the government at all.

The situation becomes more serious when children reach 11 years old and need to join a secondary school. All secondary schools, including state-run schools, charge fees which are too much for poorer families to afford. Many children drop out of school at age 11 – a tragic waste of human potential.

When we think of private schools, we think of expensive places like Eton and Harrow, and we may wonder what place they have in a country like Uganda. But you only have to visit one of these “private schools” to realise that we are talking about a very different sort of establishment. The fact is, that the state system, cannot cope with the needs of a growing population. These private schools have sprung up to meet the need. Their fees are very modest, but poor parents still struggle.

The School Building – before it collapsed

We visited one of these private schools, which left a very lasting impression on Simon, Jessica and myself. In terms of the building, the school was a disaster. Several classes were being taught together in each room. Some of the “ceilings” were just canvas. and where the walls were made of brick, these were crumbling and in danger of falling down.

But in great contrast to the building, the teaching staff were completely different. The headmistress explained that often she could not afford to pay the teachers –   and her own financial needs came last. The dedication of these teachers was remarkable considering their working conditions and financial uncertainty. But going on strike was the last thing on their minds. The needs of the children came first and they were doing their best to give these children a good education.

Soon after we arrived home, we heard the fact the building had in fact collapsed (no one was hurt) and that the building was condemned by the authorities. Building on the same site, was out of the question because the original building had been built on the side of a hill. The school is operating using temporary premises, but we really need a long-term solution.

Joel aims to build a new school and has approached us with plans. He wants to purchase some land and build a really good school, to provide primary and secondary education for many children from poor and also from affluent families. His vision is large, and there will be no compromise on quality. By providing good facilities, he can attract fees from those who can afford it, and subsidise many children from poorer families.

We, at Karuna Action, are excited about the project and aim to do everything possible to make Joel’s dream a reality. But the plain fact is, that we cannot build this school without your help. If we had large reserves of general funds we would have no hesitation in helping immediately. So we are appealing to individuals, churches, grant-making trusts and businesses to catch the vision and join with us and help us to meet the cost of this project.

We need £20,000 to buy the land needed for the school. From there on the school will be built in stages, as the capital costs are met.

If this story has moved you, please consider giving sacrificially to invest in the future of children in Uganda.

Alternatively, you can make a regular donation to a child sponsorship scheme, which will help us to meet the educational needs of a single child from Uganda. The karuna Action child sponsorship scheme is different from many other child sponsorship systems. It provides a one-to-one link between the child and Uganda, and a family from a more affluent country. The main purpose of the scheme is to ensure that the children receive a good education. Joel has identified around 120 children from poor families who could benefit from the new school. By sponsoring one of these children you will help us, and Joel by ensuring that the running costs of the school will be met. Sponsoring a child costs from  just £15 a month.