There is neither Jew nor Greek,
slave nor free,
male nor female,
for you are all one in Christ Jesus.
(Galatians 3:28 NIV)

Paul is often criticised for being pro-slavery and anti-women. But we need to distinguish between the truths he set out and how it was applied to the culture of the day. As a prophet he saw how things ought to be but he was a child of his culture and although what he said was revolutionary in its day, the full implications of what he said would need to wait for progressive revelation in future generations.

Take for instance the matter of slavery. It would take another 1800 years before men like Wilberforce came along and pointed out that slavery was morally and ethically indefensible. People have always considered that their country was superior and even in much of the 20th century, racism was considered normal. Likewise the world is still adjusting to the idea that men and women are created equal.

In this article we will look further into these words of Paul and seek to apply them to the 21st century.

Neither Jew nor Greek

In the 1st Century, the apostle Paul was journeying throughout the Roman Empire, with the good news of the gospel, founding churches, teaching them and writing letters to correct them when necessary. He visited Galatia in modern-day Turkey where he found many Jewish people who had spread out far beyond the borders of their homeland of Palestine. Wherever he went, he found Jews and Greeks or people of Greek culture and many of them followed the way of Jesus.

The Jews considered themselves a special people and it was only natural for them to have an air of superiority. Many of them accepted that the gospel was for others as well but thought they were “one cut above” people of other races. But along came Paul and declared that race was not relevant in the Kingdom of God.

Neither Slave nor Free

The economy of the Roman Empire depended upon slavery. It is estimated that up to 40% of people were slaves (Wikipedia). If the early Christians had opposed slavery they would have been persecuted as a political rather than a religious movement. In fact the Roman Empire was ruthless when it came to protecting its privileges and the early Christians would have probably been wiped out.

Paul seemed to accept that slavery was a part of the culture, but that didn’t mean he agreed with it (See Paul and Slavery). By the nature of things, slaves had to obey their masters but he gave them dignity by declaring that whether you were a free man or you were a slave was irrelevant when it came to the things that really matter.

Neither Male nor Female

Throughout human history and much of the world today, woman have been treated as second class citizens. In the 1st century the Roman, Greek and Jewish cultures still treated woman as belongings under the control of the father, and then the husband. In Rome, women were citizens but not allowed to vote, or to hold public office. Their place was seen as only in the home.

It was in this context that Paul made this revolutionary statement that in Christ, there is neither male or female. By his actions, Jesus would have said so too. He gave the women he met dignity and respect. He broke with Jewish traditions when he met the woman at Samaria, by talking to a women, a stranger and a foreigner.

Paul had respect for women. He commands men to love and cherish their wives and told them both not to deprive one another. In his letters he greets, and commends, many individual woman referring to some as co-workers. But he has often come under fire for comments about women covering their hair and remaining silent in church.

The early church could not immediately break free from the culture it grew up in. Two thousand years later we are beginning to get the right balance between the two genders. In many of our communities woman can achieve and function the same as men though we still have some way to go to see equality in every area. However Paul was way ahead of his time in seeing the truth that there is no distinguishment between men and woman in the Kingdom of God.

One in Christ Jesus

It is God’s plan to expand his kingdom to the whole of humanity and we will see that what was written for a new church, applies to us all.

Racism, and its twin brother nationalism, has been a scourge on the earth throughout human history. Wars have been fought and millions of people have been oppressed by an attitude of superiority and the belief that they have every right to conquer and pillage ‘inferior’ cultures. It is alright up to a point to be patriotic, but when this turns into nationalism, then we had better watch out.

Racism flourishes when one tribe, country or culture regards themselves as superior and special relegating outsiders to the status of sub-human or second-class. Racism causes immense economic, physical and psychological damage to people who are the subject of the racist, and in fact to the racist himself.

Racism is very subtle and not just discrimination. When we consider that people living in poverty “over there” don’t matter so much as people in our own community, we are guilty of racism. When we suppose that our country has a special place in today’s world, our superiority causes us to be racist.

My parents were lovely people and cared deeply about the world but nether-the-less I was brought up thinking that being British meant we had a right to rule the world! Later in life I needed to make a conscious effort to rid myself of racist words, thoughts and attitudes.

In the Kingdom of God there is neither British or Indian, French or African, Chinese or Japanese, and neither American or Mexican.

Discrimination based on class is found between upper, middle and working classes in Britain. It is found in the caste system in India which relegates many to be “untouchable”. It is found in America between the super-rich and the poorest citizens of that country. It is found throughout the world as millions still live in conditions of slavery. It is sometimes, though not always, linked to racism or religion.

Many wars, particularly civil wars, have been fought over the issue of class. All the time that sections of our communities set themselves above other people we will have a recipe for strife, revolution and civil war.

it is not a part of God’s plan that humans beings should be separated into different classes based on status, wealth, caste, colour, language or religion. In the Kingdom of God, class quite simply does not exist.

Today, in much of the world, woman are largely treated as equals. Sadly, this does not apply to the whole world, and in many cultures women are still regarded as second-class citizens and often treated like chattels. The Christian religion is not exempt from this though progress is being made.

We would all recognise that men are different from women. We have differing mental, physical, emotional and spiritual strengths. Neither are all men the same or all woman the same – there is much diversity between the genders and among those of the same gender.

I see no reason at all why individual women cannot perform any task, excel at any role, or hold any post in the church, in politics, in business or in the world. The truth of this verse shines through. No matter how the church and the world treat you, in the Kingdom of God, women and men have equal status. 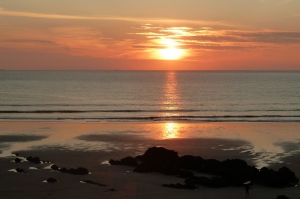 The Kingdom of God

Jesus told his followers to pray:

Your Kingdom come, your will be done on earth as it is in heaven.

The only hope for this sad old world of ours is the Kingdom of God coming down from heaven to be among us. In a kingdom the king rules and his will is done. This is what Jesus told us to pray for. Like most prayers we can be part of the answer – so we need to act in ways that bring this kingdom into reality.

Do you, like me, long for a world that is not divided into groups at war with each other. True peace will only come when we accept all woman and men, as fellow citizens of a world where we all follow the will of our creator.

It is God’s long-term plan to bring the whole world into the Kingdom of God. In that new world every member of humanity have equal status that doesn’t depend on race, class and gender or any other artificial grouping.