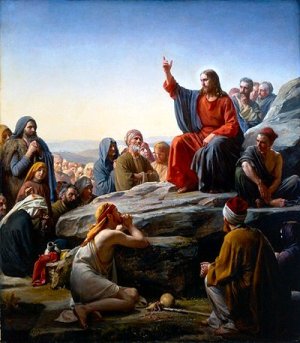 What he did say relates mainly to divorce, adultery and marital unfaithfulness. Sexual immorality was mentioned once in a list, and lust was described as adultery of the heart. His message was that ‘sexual sins’ were harmful to human relationships and were therefore subject to the higher law, “love your neighbour as yourself”.

The Old Testament law has some more dos and don’ts but also says we should not eat pork and lobster! There is more said by Paul and others but that is beyond the scope of this article. I believe that we should read the rest of the Bible through the ‘lens’ of Jesus and so I am writing about what he said.

On two occasions in Matthew’s gospel Jesus taught on the subject of divorce.

Some Pharisees came to him to test him. They asked, “Is it lawful for a man to divorce his wife for any and every reason?”

“Haven’t you read,” he replied, “that at the beginning the Creator ‘made them male and female,’ and said, ‘For this reason a man will leave his father and mother and be united to his wife, and the two will become one flesh’? So they are no longer two, but one flesh. Therefore what God has joined together, let no one separate.”

“Why then,” they asked, “did Moses command that a man give his wife a certificate of divorce and send her away?”

Jesus replied, “Moses permitted you to divorce your wives because your hearts were hard. But it was not this way from the beginning. I tell you that anyone who divorces his wife, except for marital unfaithfulness, and marries another woman commits adultery.” (Matthew 19:3-9)

Jesus placed a very high value on human relationships. He said that marriage really is ’till death do us part’ and that breaking that relationship is harmful to both parties. He only allowed divorce if that relationship was already broken by sexual unfaithfulness.

In today’s world it is so easy to get a divorce, and statistics show that ‘Christian’ couples are not immune. Jesus’ high standards still apply. We should not be judgemental when we hear of a love-less or abused couple divorcing, but if we desire to follow Jesus we must take his words and high standards to heart and determine that nothing will come between us and our wife or husband.

Lust and adultery in the heart

You have heard that it was said, ‘You shall not commit adultery.’ But I tell you that anyone who looks at a woman lustfully has already committed adultery with her in his heart. (Matthew 5:27-28)

Lust is harmful, not directly in itself, but because it is harmful to the relationship with our wife (or husband). Lust can lead to unfaithful actions, but even if it does not lead to actions, the thought can cause us to be unfaithful in our minds to the one we love.

Lust is difficult to quantify. When does admiration of a beautiful body become lust? We are all guilty of unhelpful thoughts now and again. There must be some sort of sliding scale here.

I would say that once my thoughts say something like, “I would like to share a bed with her/him”, or “I bet she would be more proficient at love-making than my partner”, then I have clearly crossed the line and am unfaithful in my mind and in my heart.

Why did Jesus come over so strong on this. It was not to condemn us but because he knew how much God, his father, loved us, and wanted the best for us,

What Jesus did not talk about

There are a number of issues related to sex which have divided Christians but Jesus didn’t even mention them.

I am not saying that these things do not matter, but clearly Jesus’ priorities are different. Perhaps I’ll be be brave enough to air some of them in future articles.

Love your neighbour as yourself

This, said Jesus, (along with loving God) was the most important commandment. Jesus’ teaching on sexual relationships was all related to this. Sex is good, but it has the potential to ruin human relationships. Jesus gave some very high standards of behaviour, but only in our own interests because he loves us.

Categories:Kingdom of God, Words of Jesus